Karnataka Election – By The Numbers

Karnataka Election – By The Numbers 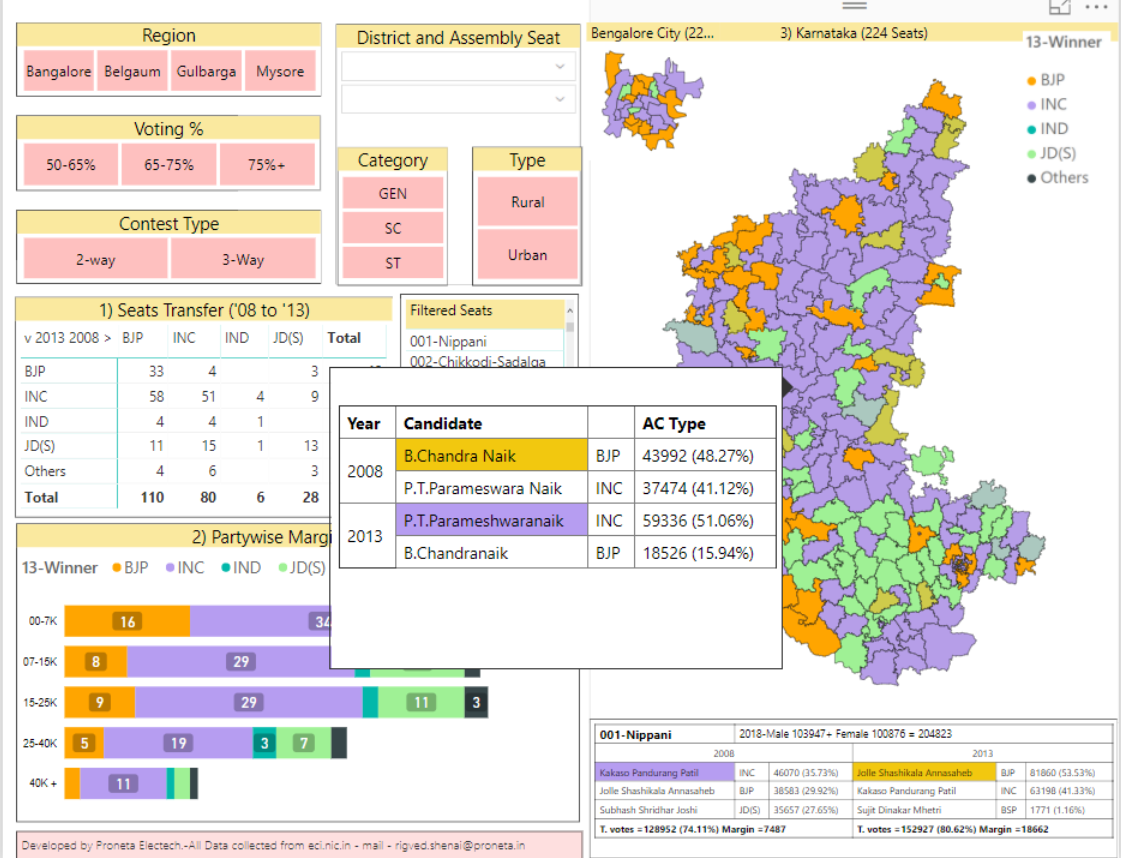 Now that 2019 election season has started warming up, both BJP and Congress have started mobilising their strategy for that big battle. With Rahul Gandhi slowly coming into his own, amalgamation of opposition and people’s rising disillusionment with Achche Din promises, the battle seems more balanced than previously imagined. That’s why the upcoming Karnataka election is so crucial.

With the possibility of simultaneous elections on the table, this may be the last major election before an early parliamentary election and thus may set up the tone. After the maiden victories in the North-East, BJP is bent on winning the last major state where Congress is in power. On the other hand, after the unexpected boost in Gujarat and slowly dawning inevitability of putting up a good fight, Congress is looking to stop BJP’s streak of victories. With Siddramaiah-Rahul on one side and Modi-Shah on the other this one is going to be a contest to watch.

With that in mind, let’s look at the results of last two assembly elections in a little detail with this interactive data visualization. Click anywhere to apply the filters and see the tables change. The map shows the 224 seats of the legislative assembly, and you may click on those shapes too to see the details in table below. All the data is taken from election commission’s website. Maps are indicative and boundaries are not to scale.

Here are a few quick insights we can glean from the visualization. We are focusing only on the number-location based insights. The campaign strategies and qualitative aspects are better left to the pundits.

Party and Marginwise Seats in 2013 elections

In 2013, 64 seats were won by a margin of less than 7000 votes, on which 34 were for Congress and 16 were for BJP. So, the comfortable majority of 122 in the assembly of 224 does not look so comfortable when we factor in the 34 seats that were won by a whisker. Any change in those will be the difference between winning and losing. A reversal to the 2008 number of BJP 35- INC 20 in those seats will send INC searching for partners to form a government with another Meghalaya on the cards.

On the other hand, there are 51 seats that Congress won in both ’08 and ’13 and a good 20 of them gave them a margin of 15,000 or more votes.  These seats seem pretty secure for now. The same number for BJP is 33 retained seats with 12 seats with more than 15K lead. Complacency, anti-incumbency and candidate change may shake up these seats, but that’s very unlikely.

It has been conventional wisdom that BJP fares better in the urban areas where there are more literate-middle class voters, where one big issue or one big rally can deliver 4-6 assembly seats to a party. This was very true of Gujarat-2018 election where The BJP picked up 44 out of 55(30 %) seats in four major urban centres of Ahmedabad, Surat, Vadodara and Rajkot. Of the 127(70%) semi-urban and rural constituencies, the Congress and its allies clocked victories in 72, against 55 of the BJP – clearly showing an edge of the opposition party.

This factor will be less prominent in this election as Karnataka is less urbanized. Karnataka has only 40 Urban seats (18% of 224) scattered over 9-10 centres including the mega city of Benaglore with 22 seats. So it will be harder for the party to pick up seats by the bunch. In 2013, these 40 seats were divided 11-25(26%-62%) between BJP-Congress, which was better than the rural seats division of 29-97 (16%-52%) between the two parties with JD(S) taking a bunch of seats. Which Brings us to the next issue.

Where does JD(S) stand?

JD(S) is mainly stronger in the southern region. (See green area in the Map) and has very little clout in the urban areas (3 out of 40 urban seats). With a charged-up BJP and determined Congress in the fray, it faces the danger of being relegated to fate of BSP in Uttar Pradesh or worse, of Congress in Tripura. BJP will definitely eye to steal winnable candidates from the JD(S) to boost its numbers. So, which side does the JD(S) help by getting in fray?

So, Rahul Gandhi’s remark calling JD(S) the B-team of BJP may not be far off the mark.

In conclusion, Congress’ majority is not so comfortable, No Urban Boost available for BJP this time, and More JD(S) presence will help BJP fare better.

We have not included the numbers from 2014 Modi-wave,  Loksabha elections in this analysis. Also, if you would like to look at impact of BSP voters swinging the election, any suggestions on more factors that would be relevant to make this analysis more useful, then please let us know in the comments. We would be glad to write a more detailed post about those factors soon.

Till then, here is a more conventional dashboard with only filters to help you draw your own conclusions. Share the screenshots to let us know what did you discover.